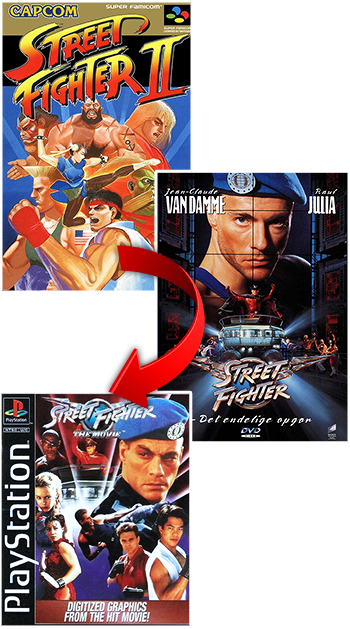 This trope refers to when a work is adapted, and then the adaptation is adapted, and this leads to the work being adapted back into its original medium. Often occurs because the original version is so different from the adapted version that it's useless as a tie-in, leading the work to be adapted back. It can also be due to Adaptation Displacement, however. Other reasons are quite possible as well, because this trope cares not for motives of the recursive adapter, merely that the adaptation "stack" curves back on itself (for example, book ⟿ movie ⟿ TV show ⟿ book).

This is the result of making a novelization of a movie based on a book, or making a movie out of a Screen-to-Stage Adaptation, effectively remaking the original movie. See also Recursive Import, Recursive Fanfiction, Ret-Canon, Third-Option Adaptation, and Canon Immigrant.