Recap / Doctor Who S38E8 "The Haunting of Villa Diodati" 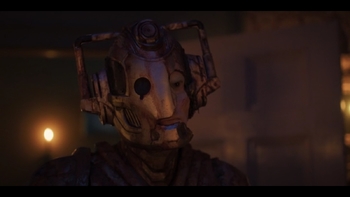 Ladies and Gentlemen... it's alive.
Advertisement:

The one where sanity is tempered by steel.

Villa Diodati, near Lake Geneva, 1816. The infamous Lord Byron, along with Mary "Mrs. Shelley" Godwin, her stepsister Claire Clairmont, and Byron's personal physician John Polidori are kept inside by a dark and stormy night, for what has been several days in a row. It is eventually suggested that maybe one of the men should read some chilling ghost stories. Byron is more than amenable, but the reading is interrupted by an unexpected knock on the door: the Doctor and company, soaking wet from a walk up from the TARDIS.

The fam only plans to stay for a short time, with rules including not to mention Frankenstein and "Nobody snog Byron", but there's already something wrong with this fabled night where some of Britain's greatest literary minds came up with chilling tales of terror: Percy Bysshe Shelley, Mary's future husband and one of the participants, is missing. Apparently he went down to the lake earlier and failed to return. The Doctor has a feeling that she and her friends are going to have to stay at Villa Diodati for a little bit longer than she'd prefer.

And there are unsettling things going on in the house: a vase leaps from its pedestal and across a hallway, smashing against a wall. A skeletal hand emerges from a fallen painting. Mysterious figures appear: a maid, a young girl, a shadowy figure seen in a flash of lightning. Graham, searching for a toilet, goes up a staircase only to find himself emerging from a doorway that he already came through on the floor below.