Recap / Big Finish Doctor Who 123 The Company Of Friends 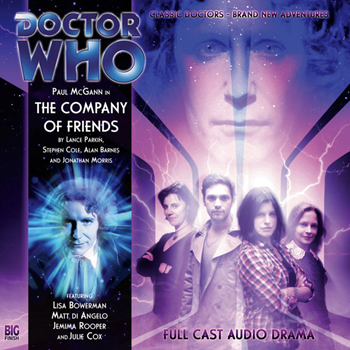 Each medium featuring the Eighth Doctor collides. It's gonna take ages to sort out the canon now.

Four one-parters starring people the Doctor associates or has associated with, but haven't travelled with him as a companion (in this medium, at least) to give them A Day in the Limelight.

Professor Bernice Summerfield has been hired to excavate a deserted coal mine on a distant planet. She finds a TARDIS key. Guess whose? Yes, the Eighth Doctor turns up—but he's not the one Benny's sponsor is after.

Alien Defence Industries, Ltd., has a celebrity spokesperson: the Doctor. Or, rather, a poor simulacrum of the Doctor. Not amused, the Doctor turns up to put a stop to it. While he's being captured, Fitz convinces the media that he's the brains of the operation.

Izzy persuades the Doctor to take her back to her childhood, so she can get a super-rare comic.

On a summer night in 1816, Mary Shelley meets the Doctor.