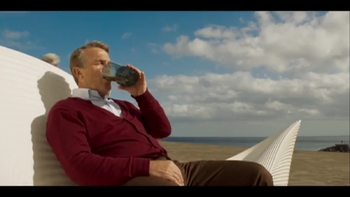 Good thing this is Orphan 55. If it was Eiffel 55, they'd be feeling really blue.

The one where Team TARDIS goes on vacation. If you even need a moment to guess how this is gonna go, you're watching the wrong show. You get three guesses and, no, the first two don't count.

After the events of the previous episode, Team TARDIS is in need of a much-deserved lie down. Fortunately, Graham's collected enough space coupons for an all-inclusive luxury vacation, and all the companions agree that they could use one, perhaps to cheer up the Doctor, who's been understandably glummer than usual. When the assembled coupons turn into a teleport cube and abruptly whisk the "fam" off to the beautiful Tranquillity Spa, they're greeted by Hyph3n (with a 3), and Yaz, Ryan and Graham immediately set off to enjoy the amenities. The Doctor decides to have a look around by herself. Among the guests, elderly couple Benni and Vilma are sitting and watching the scenery, but Yaz's arrival interrupts Benni's attempt at proposing to his long-time partner. Ryan, attempting to get a snack from a vending machine, gets a shock instead, finding himself infected with a hopper virus. Fortunately, the Doctor knows just the right first aid for that.

But then an alarm goes off, with the PA system claiming it's for a standard safety drill. As Yaz, Benni and Vilma head for the nearest muster point, the Doctor decides to investigate, and Ryan, still disoriented, meets a woman named Bella who is recovering from the same thing he is. The two of them wind up in the perfect position to see one of the security guards running through the halls with a gun, which suggests that whatever's going on definitely isn't a drill. Graham, meanwhile, meets maintenance man Nevi and his considerably more tech-savvy son Sylas. The Doctor uses her psychic paper to get herself into the security room, where it transpires that the spa's ionic membrane is down. Now that's something, as the Doctor points out: what kind of luxury resort needs to defend itself with an ionic membrane? Deadly creatures burst into the hotel and begin killing guests, but although Graham, Yaz and some of their companions make it to security when summoned, no one else does, with Ryan and Benni missing, the latter having stopped to retrieve Vilma's dropped hat. Ryan and Bella are quickly found safe after the Doctor repairs the ionic membrane, but Benni is still missing.

It turns out that Tranquillity Spa is built inside a hologram-disguised environmental dome on an otherwise uninhabitable planet, and Benni has been taken outside, surviving only due to his medical oxygen tank. The planet is Orphan 55, the designation meaning it should be utterly barren and lifeless — so what are the Dregs, and how did they survive whatever disaster befell this place? The only way to find out lies, perhaps, in rescuing Benni, and the Doctor persuades Kane, the woman in charge, to lead all the survivors of the attack on an expedition for that purpose. So Kane, other security guard Vorm, Hyph3n, Nevi, Sylas, Bella and Vilma set out in the resort truck with the Doctor, Ryan, Graham and Yaz. Everyone's issued an oxygen tank, capable of replenishing itself automatically in high-oxygen environments, and they set out into the dangerous wastelands of the orphan planet to rescue Benni from the "Dregs". But the Doctor is wondering about something else, too, noting that the Dregs don't have the capability to infect the resort's computers with hopper viruses, suggesting that someone wanted the resort vulnerable.

On the drive, Ryan and Bella bond over dead parents, Bella having lost her father a month ago and her apparently neglectful mother when she was 10. Yaz takes interest in the flirting, but when Benni's motion abruptly changes direction, indicating the Dregs definitely have him, Kane attempts to abort the mission. At everyone else's protests, she reluctantly orders Vorm to continue following Benni's tracker. But eventually the truck is caught in a trap, laid by the Dregs, that renders the vehicle immobile. Scouting outside, Kane tells the Doctor that the mist is toxic, and the sunlight causes lethal blistering with ten minutes' exposure. Fortunately, there's a hatch leading to a maintenance tunnel not far away, but the Dregs are coming. A first attempt to evacuate everyone from the truck fails, and after everyone's back inside, Benni's voice is heard. He asks Vilma to marry him (which she accepts), before requesting that someone shoot him. As the Dregs begin to break in, the Doctor leads everyone out the bottom of the truck towards the hatch while Kane and Vorm hold the Dregs off. Hyph3n is the first to be killed, followed by Vorm, but Kane is thrown a ways and rejoins the group after they find her on the ground near the hatch. Everyone flees underground.

But once they get underground, Bella grabs a gun and reveals herself as Kane's estranged daughter, who sabotaged the resort with hopper viruses to destroy everything her mother has built.