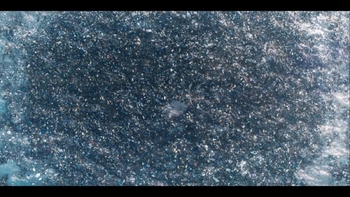 An ocean full of plastic. The aesop speaks for itself.
Advertisement:

The one with plastic. No, not them.

Above the Indian Ocean, British astronaut Adam Lang's Soyuz descent capsule malfunctions suddenly, causing him to go missing. In Peru, travelling vloggers Gabriela and Jamila camp by a beautiful river that has become a polluted dump site, but when Jamila wakes up in the middle of the night, she's suddenly attacked by a bird. When Gabriela wakes up and finds her friend missing and dead birds lying about, she tries to touch one... only for Ryan to suddenly turn up and warn her not to do so, picking up the bird's corpse in the process. In the UK, troubled ex-policeman Jake Willis discovers that Adam — his husband — is missing, presumed dead, just before receiving several text messages from Adam asking for help and placing him in Hong Kong. When Jake arrives, he tries to kick down the door to the building where Adam apparently is, only to be met by Yaz and Graham, who have seen strange energy readings and have the skeleton keys to enter. In Madagascar, scientist Suki Cheng is annoyed when she is yet again beaten to work by her colleague Amaru when they are called to help rescue a man floating in the surf by the Doctor. The man, survivor of a missing US submarine, panics about something that got inside the vessel before his body is taken over by white scale-like growths and disintegrates.

All of these events, around the world, have a connection... but what is it? A check on social media leads Ryan and Gabriela to an emergency call and a hospital where Jamila was taken. But the hospital is eerily empty, and her body, under a sheet, has more of the white growths. Ryan calls the Doctor.

The Doctor arrives alone in the TARDIS in time to witness Jamila's infection spread across her face and cause her to explode. The Doctor, Ryan, and Gabriela set off for Hong Kong and meet with Graham, Yaz, and Jake, who has just kicked down the door to the room where the energy readings are emanating from and discover Adam barely conscious in a strange alien lab. Yaz notices a translucent panel with alien language next to Adam and recognizes its value. The Doctor, Ryan, Gabriela, Graham, Yaz, and Jake evacuate Adam, but two humanoid figures in gas masks gang up on them. Jake subdues them in close combat and shoots them with one of their laser rifles.

Yaz insists to the Doctor that she needs the translucent alien panel, and has to track the aliens down. Gabriela agrees to stay behind in Hong Kong, also to the Doctor's reluctance. The Doctor agrees to let them go for one hour, while she travels to Madagascar to take care of Adam. Yaz and Gabriela return to the alien lab and try to recover the panel, but find another humanoid in a gas mask. He teleports away. Yaz and Gabriela decide to follow him to what appears to be an alien environment of green lights and plastic waste held together by fishing nets, where they are confronted with the mast of the missing submarine. Yaz wonders aloud whether she has discovered an alien planet.

In Madagascar, the Doctor and company discover that the growths have spread on Adam's face. The Doctor asks Suki if her lab has enough advanced medical equipment, up to a gene sequencer, and Suki confirms it. The Doctor asks Amaru to stay out in front and watch the birds while she studies the growths and Ryan dissects the bird corpse he brought along, which is full of plastic. Meanwhile, Graham assures Adam he knows how to take care of him with an IV drip, having been through cancer treatment; as they wait outside on the seashore for Adam to heal, Graham comforts Jake, who reveals he has an inferiority complex from being married to Adam; Jake also hates travelling abroad and is afraid to commit, which is why he wasn't present at Adam's launch. The Doctor finds the growths and the odd behaviour of the birds stem from an alien bacterium which attaches easily to plastics, including microplastics; the natural enzymes of the birds are trying to prevent the alien bacterium from spreading.

The Doctor figures that the bird enzymes can be used to engineer a cure for the bacterium. But after she's gotten a rudimentary antidote synthesized, and as she wonders why a lab of such size and high-tech would be in such a location as rural Madagascar, Suki reveals herself: she's been researching the disease, called Praxeus, the entire time, and now that a cure has been found, she can take the data. The infected birds attack the lab, killing Amaru outside before heading inside, as per Suki's warning that Praxeus knows when people are trying to cure it and will fight back. Suki teleports away, leaving the Doctor, Graham, Ryan and Jake, hauling along Adam, to run for the TARDIS and ward off the blackbirds.

The Doctor rigs up a way to keep Adam alive within the TARDIS console room, and has the TARDIS make an improved antidote. Adam and Jake briefly argue over whether Adam should volunteer as a test subject, but Jake relents. They share a moment together and begin to reconcile.

The Doctor locks onto Yaz's coordinates and lands the TARDIS in the plastic landscape. Yaz reunites with the Doctor, only for the Doctor to disappoint her by revealing they are underneath the Indian Ocean garbage patch, laden with plastic. The Doctor, Yaz, Graham, Ryan, and Gabriela find the wounded humanoid and unmask him, triggering his death from Praxeus. The five of them find Suki inspecting the engines of a small unpowered alien space ship. Suki reveals the ship is hers, and her race are almost dead from Praxeus, but have been able to hold off Praxeus because of their different metabolism. However, they cannot continue to thrive without finding an antidote, and had searched three galaxies before landing upon the perfect plastic-polluted planet on which to investigate Praxeus' effects: Earth.

The Doctor chews Suki out for this, but Suki tells her she has already transmitted the formula for the antidote to the rest of her species. The Doctor reveals the antidote is human-only and unlikely to work on other species, leaving Suki, who has tested the antidote on herself, more vulnerable to Praxeus. Suki promptly disintegrates.

The Doctor then notices Adam has grown healthy, proving the antidote worked, and that the ship has organic fuel cells. She realizes the fuel cells can be used to amplify the effects of the antidote and distribute it farther out. The Doctor, Yaz, Ryan, Graham, Jake, Adam, and Gabriela repair the ship and set it to fly into the stratosphere to explode and help destroy Praxeus. They escape the ship, only to find that the autopilot is not working and Jake has stayed behind to guide the ship to its final destination. Adam pleads to Jake not to sacrifice himself. Jake points out that he wants to, and must, do more to save the billions of lives on Earth. The Doctor rushes to materialize the TARDIS around Jake, though, saving him the millisecond before the ship explodes.

The Doctor drops Adam, Jake, and Gabriela off at the lab in Madagascar. Adam comments that he always wanted a honeymoon, and Jake relents, taking in the view in the meantime. The Doctor and Ryan encourage Gabriela to look for a new travel companion in Jake and Adam.