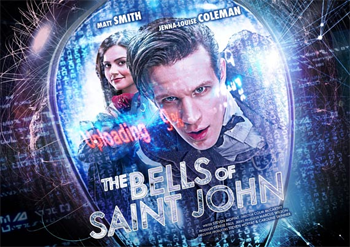 Alternatively, the one with the not-Patriots.

The first episode of the second half of Series 7, written by Steven Moffat, the captain of the Nightmare Fuel ship headed right towards your dreams.

"Prequel to The Bells of Saint John": The Doctor sits on a swing at a playground, where he meets a little girl who asks him why he looks so lonely. When the Doctor says it's cause he can't seem to find his friend, the girl tells him that when she loses things (like her nan, or her mojo), she just goes to a quiet place. She then says goodbye to the Doctor and, without him knowing, is revealed by her mother to be a very young Clara. Watch this prequel on YouTube

The Doctor has found a tremendously quiet place: a medieval monastery. When the local monks inform him that his TARDIS phone is ringing, there's a modern-day Clara Oswald on the other end, working as a governess and calling for tech support (she got the number from "the woman in the shop... She said it's the best helpline in the universe"). She asks him where the Internet went. And she has no idea who he is. After the Doctor vworps to her space/time coordinates, with a gorgeous new outfit, he finds Clara about to be uploaded into a London-wide wi-fi network, through a very creepy spoon-headed robot thing. He hacks into the system and draws her back to reality, pissing off the leaders of a very evil corporation which is uploading people through wi-fi from all over the world.

Clara remains unconscious, so the Doctor puts her to bed, leaving her with some biscuits (Jammie Dodgers!) and flowers. He also reads her childhood notebook, and discovers that she wants to see the world. Once she wakes up (hours later) and pokes her head out of the window, the Doctor is still camped outside the house, and Clara eagerly joins him outside to find out what on earth is going on. The corporation turns out to be controlling people through wi-fi. Rather distressingly, Clara Came Back Strong from the other end; the corporation adjusted her mind to include everything there is to know about computers. Both decide to make good use of this, and (after a quick detour to halt a plane the corporation's crashing into London) take a shortcut to next morning. The TARDIS vworps into central London, the Doctor quickly collects some spare change by passing off his magically appearing box as a busking prop and the two go have breakfast. While Clara uses her new skills to hack into the wi-fi (although the Doctor still insists he should do it), the corporation uses the staff as People Puppets to taunt the Doctor, distracting him until they can reclaim Clara using a spoonhead that looks just like Eleven.

The Doctor traces the signal to the Shard (the tallest building in Western Europe as of 2013) and takes his anti-grav motorbike there as soon as he can, riding vertically up the building. He confronts the Consummate Professional woman in charge. And reveals that it was a distraction — he's actually still enjoying his coffee at the café, watching over Clara's lifeless form. The spoonhead-with-the-Doctor's-face takes off its helmet and draws the CEO into the network, then manipulates the corporation into shutting down everything. By that time, UNIT have arrived. To the supreme annoyance of the villain behind it all: the Great Intelligence, still played by Richard E. Grant. The people enslaved into working at the corporation finally snap out of their hypnosis. Sadly for the CEO, who's easily in her 50s, her hypnosis seems to have lasted about 50 years. She's terrified when she sees UNIT surrounding her.

The Doctor, happy that Clara survived for once, invites her to become his companion. She tells him to ask her again the next day.

Do you know where you are?