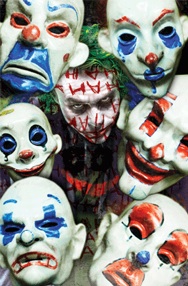 A group of people wearing masks is never a good sign. Maybe it's the anonymity, the obvious Uncanny Valley, or decades of horror movies ingraining a deep sense of distrust about someone wearing a mask outside of a Masquerade Ball (or even in one, if it's sufficiently creepy). It's because of this dehumanizing aspect that masks are often used by villains, their Gas Mask Mooks, and other Faceless Goons.

This varies by mask:

A full face mask is perhaps the most ominous of the lot, varying by type:

See also Faceless Goons, Gas Mask Mooks, Scary Shiny Glasses, and Henohenomoheji. White Mask of Doom is a common subtrope. Compare Cool Mask and Coat, Hat, Mask. When combined with the classic Black Cloak, it's the uniform of a Secret Circle of Secrets. When the mask itself is malevolent, that's Evil Mask. See also Makeup Is Evil.