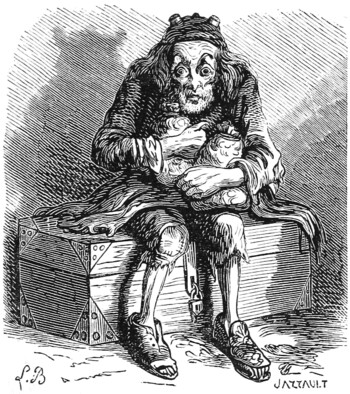 Mammon as depicted in the Dictionnaire Infernal.
"No man can serve two masters: for either he will hate the one, and love the other; or else he will hold to the one, and despise the other. Ye cannot serve God and Mammon."
— Matthew 6:24, The Bible
Advertisement:

Mammon: Prince of Hell, and Personification of Greed.

Mammon first appeared in the Gospels as a term used to refer to material wealth and to entities and people promising wealth. During the Middle Ages, the term was often personified into a demon and appeared in several occult texts as an infernal figure of some note, often as one of the major princes of the fallen angels. He was particularly popular in sets where each Prince was matched to one of the Seven Deadly Sins; Mammon's associated sin, of course, was Greed.

In modern fiction, Mammon commonly appears as a powerful demonic figure associated with the hoarding of material wealth. He's typically portrayed as greedy and miserly himself, but is also sometimes interested in spreading this vice among mortals. He is one of the named demons least likely to be conflated with Satan and to instead consistently remain his own distinct entity, in part because of his strong thematic association with a specialized sin.

A Sub-Trope of The Almighty Dollar and Demon Lords and Archdevils. For Mammon's infernal peers, see Asmodeus, Baphomet, Beelzebub and Mephistopheles.