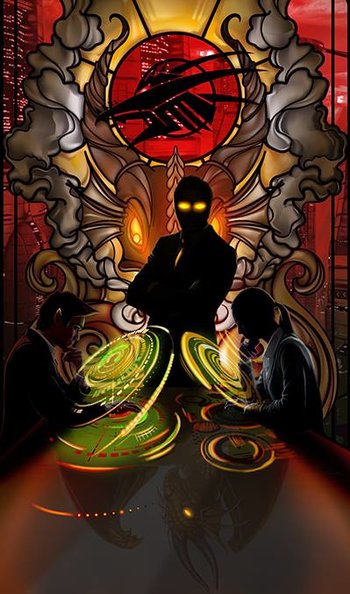 In medieval European folklore, dragons were often depicted as living incarnations of sin or calamity. At their worst, they were the ultimate hoarders, jealously guarding what wealth and territory they saw as theirs by right of strength. In modern times, the allegory of the dragon can be found not just in fairytales or fantasy stories, but serves as a fitting symbol for large commercial companies. It's the idea of a corporation as this monolithic beast, whose domain is only limited by the shadow made from atop its tower as it spreads wide its wings to blot out the sun. The effects of such an organisation can bring desolation to natural resources or small businesses just to add more treasured assets to a mountainous hoard. If the company is a war profiteer, there might not even be a difference between actual beast and business, with distant lands being made barren or marred by fire-scorched ruins.

Not all Corporate Dragons are tyrannical, however. Sometimes it's merely a businessman who seems nigh-untouchable compared to his peers, as a dragon is to a pack of wolves or screaming villagers... or perhaps they genuinely are a literal dragon.

In Urban Fantasy settings or medieval fantasy worlds undergoing their version of modernization, this may be included as traditional fantasy dragons' response to growing economies and emergent capitalism — after all, capitalist wealth aggregation and economic power are likely going to be very appealing to creatures motivated by greed and a desire for control.

Sometimes, this theme includes a Knight in Shining Armor — intent on slaying the dragon — appearing in the form of a Private Detective, a straight-arrow cop, a whistleblower, or similar protagonist.

For another Urban Fantasy stereotype, see Vampires Own Night Clubs.