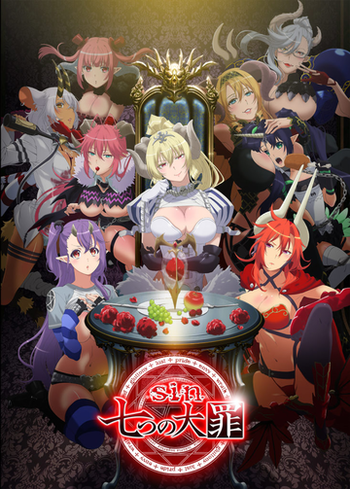 Hell has never been hotter!
Advertisement:

Seven Mortal Sins or Sin: Nanatsu no Taizai is an anime from the 2017 Spring season by Artland and TNK based on a figure line from the creators of Queen's Blade.

The story follows the fallen archangel Lucifer, who was cast down from Heaven because of her pride. She briefly lands on Earth, where a girl named Maria Totsuka finds her and Lucifer gives her an angel's blessing on a whim, before falling to the lowest level of Hell. In hell, Lucifer meets Leviathan, and Leviathan explains to Lucifer about The Seven Deadly Sins, the seven demon king rulers of hell. After The Seven Deadly Sins seal Lucifer's powers, Lucifer goes on a journey with Maria and Leviathan to defeat them.

It is available for legal streaming with subtitles on Crunchyroll here

Not to be confused with the other The Seven Deadly Sins. (Which is, coincidentally enough, also an ecchi series).

A Mobile Game titled Seven Mortal Sins: X-TASY was released in June 2nd, 2021. It features both the Seven Deadly Sins and the Seven Heavenly Virtues, as well as original characters, and its story is a direct continuation of the anime. It received an international release in April 25th, 2022.

Example of:
Demon Lords and Archdevils