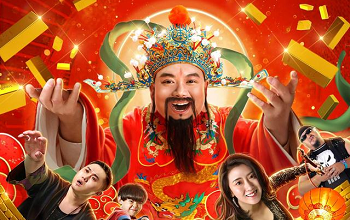 "When he takes a bath, is it laundered money?"
"Blessed Exchequer, whose greed is eternal. Allow this humble bribe to open your ears and hear this plea from your most devout debtor."
— Quark praying, Star Trek: Deep Space Nine, "The Emperor's New Cloak"
Advertisement:

A deity whose power is wealth or money-related. Named "Almighty" by Jesus when he warned money had an allure or power which could distract people from serving God.

Wealth gods are Older Than Dirt if you count food as currency. For Stone Age cultures, a Food God was also the wealth god who brought forth plentiful grain and flocks of livestock. Hungry people value food over other currencies. Analysis of fossilized skeletons shows that malnutrition was common during ancient Egypt, Mesopotamia, and amongst pre-Roman European tribes. Modern ideas about wealth and money solidify during the Older Than Feudalism period.

Real life wealth gods often fit the mold of "healthy, wealthy, and wise", where a model of virtue drew abundance or reliable "daily bread". Sometimes a family's wealth has a protective spirit, or a livelihood such as merchants and shopkeepers have a Patron Saint. Historical evil gods/spirits related to money had domains like poverty, famine, bad luck, ill luck, or Greed. Such evil gods or demons of greed, poverty, or misfortune are an Inverted Trope.

Mixed morality around money is also reflected in that some tricksters are also wealth gods, such as the Greek god Hermes. The infamous Loki's help for the Norse pantheon was primarily financial. Sometimes a Love Goddess is also the wealth deity, since she makes people happy and the jewels look so good on her. Since The Power of the Sun is symbolized by the metal gold, a solar deity is sometimes a wealth deity, like sun god Ra's daughter Hathor.

Strangely, wealth deities are more common in real life than fiction. Even fantasy worlds where Gods Need Prayer Badly might lack a wealth deity despite all the potential worshippers looking for divine help with their finances. Probably fantasy wealth gods suffer from the Boring, but Practical trope since they're more likely to be encountered at an everyday store than a battle. But wealth deities can be a balance-shifting Wild Card since their power of money is True Neutral. Good, evil, chaos, and law all use the same currency.

Fantasy humans or aliens like DS9's Ferengi might worship money directly, a case of Blue-and-Orange Morality. But in real life, humans "worship" money by ignoring all gods/values to pursue money. Money itself as a god is an Internal Subtrope of the wealth god trope. Characters who experience money itself as a god are seen in tropes like: The Scrooge, Gold Fever, Loves Only Gold, Miser Advisor, Money Fetish, Every Man Has His Price, Screw the Rules, I Have Money!, Money Is Not Power, or Death by Materialism.

This is a Sub-Trope to Stock Gods. Not to be confused with novels or other works of fiction named, "God of Money". Supetrope to Mammon.