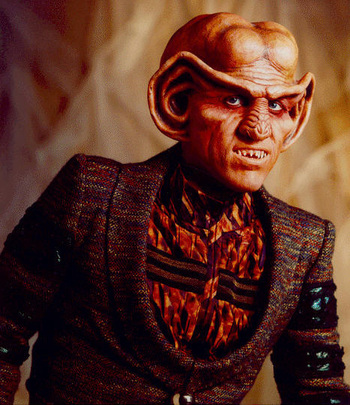 Played By: Armin Shimerman
Odo: Don't worry, I plan to investigate the Klingons, the Bajorans, Quark, the visiting Terrelians...
Sisko: You think Quark had something to do with this?
Odo: (perplexed) I always investigate Quark.
—"Visionary"

A mix of The Bartender and Neighbourhood Friendly Gangster, with a dash of Peter Lorre thrown in. Quark has been a fixture on the station since before even Odo's time. Being a Ferengi means he is a member of a Planet of Hats of ultra-ruthless, ludicrously sexist capitalists - though he has a soft spot for Dax, and other scoundrels like himself. His brother Rom and his nephew Nog started out as the Too Dumb to Live-type, but it turned out they were just hiding behind these images too. 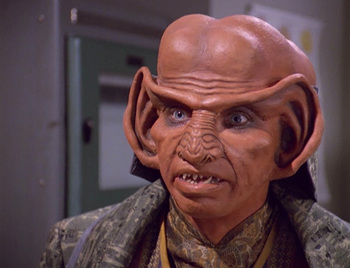 Played By: Max Grodénchik
Odo: I've had my eye on you for a long time, Rom. You're not as stupid as you look!
Rom: I am, too!
— "Necessary Evil"

Quark's younger brother and Nog's father. Initially nothing more than a goofy comic relief character, completely dominated by his brother, he was revealed to have Hidden Depths as the series went on. He later found his true calling as an station engineer under Chief O'Brien's tutelage. Interestingly, he does not join Starfleet like his son, but rather enlists in the Bajoran Militia; hence the rarely seen grey-on-green uniform. 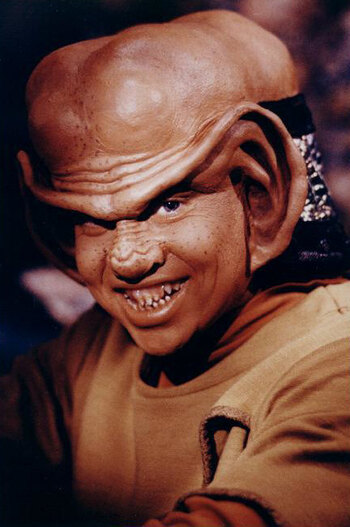 Played By: Aron Eisenberg
Rom: You remember my son Nog, don't you? He's the first Ferengi to join Starfleet.
Zek: I'll try not to hold that against him.
— "Profit and Lace"

Quark's nephew. Starts out as Jake's slacker best friend, but then joins Starfleet and becomes a shining example of a straight-up, by-the-book soldier. This occasionally lapses into New Meat, except that, because Starfleet is only Mildly Military, no one finds him the least bit annoying. 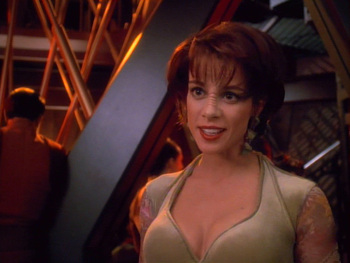 Played By: Chase Masterson
Leeta: I have brains!
Quark: Sure you do, honey. That's why I hired you. Now, eat up, and then take those brains back to the dabo wheel where the customers can get a good looong look at them.
— "Doctor Bashir, I Presume?"

A very busty Bajoran Dabo girl who works at Quark's. Introduced as blatant fanservice. Bubbly, outgoing, and likable, Leeta was known as a friend to many on the station. In the beginning, she was attracted to Dr. Bashir. But eventually Quark's bumbling, awkward, Genius Ditz of a brother Rom catches her eye. By Season 6, they would eventually marry. In the series finale, she becomes First Lady of Ferenginar after Rom is made Grand Nagus. 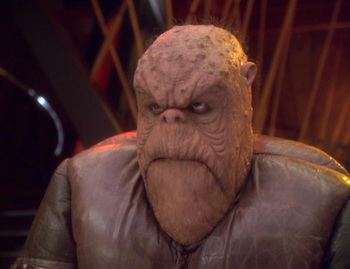 "People love him. He's like a mascot. Everyone who comes in here expects to see him, and if they don't, it doesn't feel like home to them."
— Quark (Leaning on the Fourth Wall a bit)

A friend of Quark's and a permanent fixture at his bar. He never speaks a single line over the course of the series. 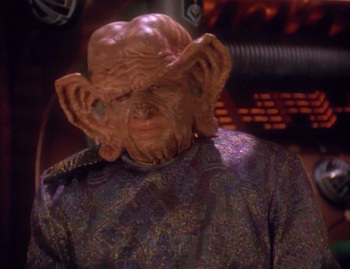 Played By: Wallace Shawn
Zek: The Gamma Quadrant, gentlemen — millions of new worlds at our very doorstep. The potential for Ferengi business expansion is staggering.
Zek's crony: And best of all, no one there has ever heard the name "Ferengi"!
— "The Nagus"
Leader of the Ferengi Alliance, he appears in almost every Ferengi episode. He is often toted as being the wealthiest Ferengi alive, but later on it is revealed that his mind is not what it used to be. He starts a relationship with Quark's mother, Ishka, who ends up becoming the woman behind the man by helping him with his memory problems. At the end of the show, he retires from the position and (at Ishka's suggestion) passes social reform granting female rights, environmental regulations, and many other things. 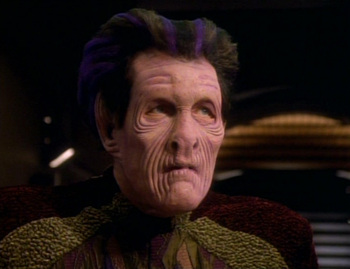 Zek's Hupyrian manservant/bodyguard. As such, he's taken a vow to not speak to anyone except Zek. 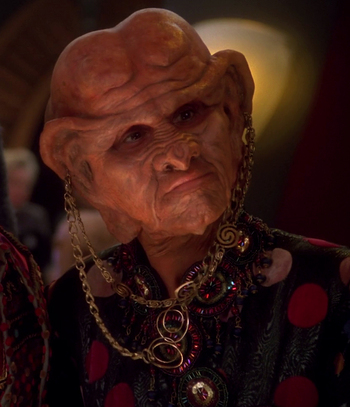 Played By: Andrea Martin/Cecily Adams
"Your father might have bought you your first copy of the Rules of Acquisition, but who helped you memorize them?"
— To Quark, "Family Business"

Quark and Rom's mother, and Nog's grandmother. At the start of the series, Ferengi females are forbidden from making profit, leaving the house, or even to wear clothes. In her first appearance, it is revealed that she has secretly been making profit for years, bringing Brunt into the picture as according to Ferengi law, she is Quark's responsibility. As the series progresses, she eventually enters into a relationship with Grand Nagus Zek, secretly becoming his advisor and ensuring liberalization of the laws banning females from wearing clothes. 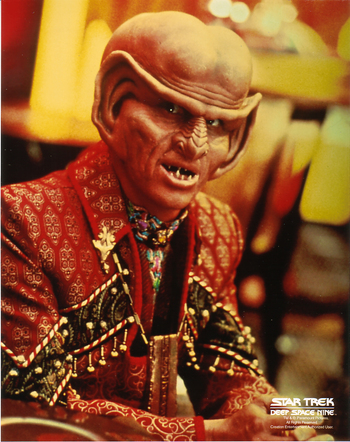 Played By: Jeffrey Combs
"You are a disease, Quark, a festering tumor on the lobes of Ferengi society; and it's my job to cut you off."
— "Body Parts"

A liquidator of the Ferengi Commerce Authority, which combines Intimidating Revenue Service with State Sec. He hounds Quark for several years because his mother is trying to extend rights for Ferengi females, though later it's revealed he's very ambitious and wants to become Grand Nagus himself. 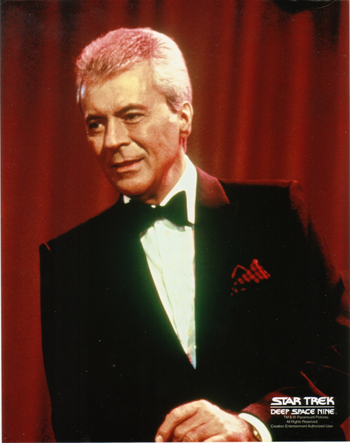 Played By: James Darren
"When you sing in as many joints as I have, you become a student of the human heart."
— "His Way"

A Rat Pack-era hologram who was installed at the behest of Bashir. Vic's creator, who was of the Playful Hacker type, designed him to be self-aware and even (somewhat) autonomous. Outside of counseling the crew on their love troubles and PTSD, all he could offer was a port of calm during the Dominion War. 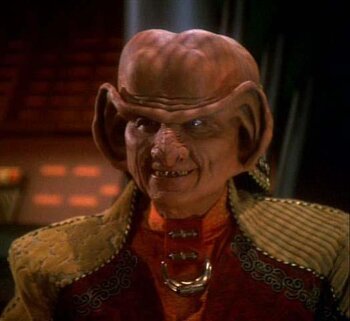 A Ferengi eliminator known for being more interested in fighting than in profit, something extremely unusual among Ferengi. Nevertheless, his unconventional skillset made him a useful addition to Quark's rescue operation. 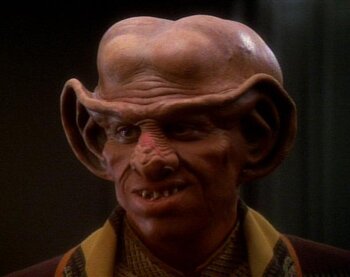 Quark's cousin. A very successful arms dealer who owns his own moon. He and Quark despise each other.