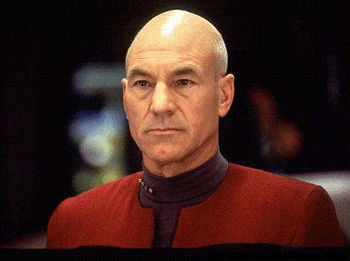 Baldness is usually implemented by television and film writers as a sign of premature aging, poor morality, or just general weakness. But occasionally, baldness instead indicates just how awesome a character is, usually representing leadership or over-the-top manliness. Bald, Black Leader Guy is a popular subtrope since, for some reason, black men in leadership positions are almost always bald in fiction. In the spirit of not spinning off into over-troping, this includes men and women who voluntarily shave their heads.

It's interesting to note that among actors, great lengths used to be taken to avoid shaving their heads for a role (or taking off their toupee for those that were already bald), as it was something they couldn't drop once the filming ended and the cameras stopped rolling. The bald wig was elevated to an art form during this period. As an example, take a look at the Bill Murray movie Stripes. For the boot camp scenes, everyone else in the cast sports shaved heads, whereas Bill Murray and Harold Ramis merely got short haircuts. Nowadays, not shaving your head for a role that requires it is seen as unprofessional and not being dedicated to your craft.

Contrast Bald of Evil, though there can be overlap between the two if the villain is a badass. See also Perma-Shave. Depending on the context, Bald Women is the Distaff Counterpart of this trope.

No Real Life Examples, Please! - It is sufficient to say that bald people who are badasses do exist in Real Life, so it is Truth in Television.