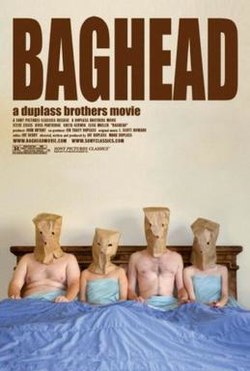 Baghead is a 2008 Horror/Comedy Film written and directed by Jay Duplass and Mark Duplass and starring Ross Partridge, Elise Muller, Greta Gerwig, Steve Zissis, and Jett Garner. The premise of the film is that Chad (Zissis), Matt (Partridge), Michelle (Gerwig), and Catherine (Muller) attend a local film festival honoring Jett Garner and his latest film, "We're All Naked", and afterwards, talk in a bar about how they've never been in a major film, and probably never will. Matt comes up with a brilliant idea, that they all go up to the cabin owned by Chad's uncle and write a screenplay starring them so that they'll have a vehicle to get movie credits.

At the cabin, it quickly becomes apparently that Chad is besotted with Michelle, while she sees him as just a friend. Meanwhile, Michelle is trying to make the moves on Matt, who vowed to Chad that he would not sleep with her and Catherine is not currently dating Matt, but has been off and on with him for the last eleven years. After Michelle begs off on the first night of script brainstorming, she has a nightmare involving being threatened by a man with a paper bag for a mask and the group decides to make that the premise of their movie. The next morning, Christine turns up missing, and shortly thereafter, so does Chad. While they're gone, Michelle and Matt succumb and have a make-out session before Matt begs off to go upstairs and relieve his tension with a bottle of shampoo. That's when he's set upon by a mysterious figure with a bag on his head...

The film is intended to be a parody of low-budget indie films, complete with shaky camera work, awkward zooms that are out-of-focus, and odd cuts.