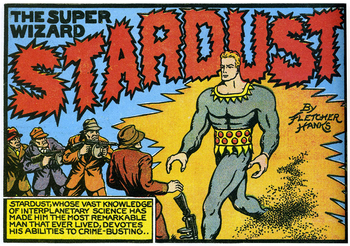 "You are now in the power of Stardust."
Advertisement:

Stardust the Super Wizard is a Golden Age superhero, written, penciled and inked by Fletcher Hanks for the Eisner & Iger comic book "packager".

The titular character is known for his vaguely defined, god-like superpowers and his creatively bizarre version of "justice". Stardust uses the power of science to save New York City from various nazis, gangsters and aliens bent on destroying it.

Stardust made his debut in "Fantastic Comics" #1 (December 1939) and remained a staple of the magazine up until his last story, which was instead printed in "Big Three Comics" #2 (Winter 1941). The rather brief run of the series also happens to span the entirety of Hanks' career in comics.

The aforementioned books have since lapsed into the Public Domain, allowing for these comics to be legally shared online, and for the character to be appropriated by any author for any purpose. This has helped Stardust to attain something of an ironic cult following in recent decades, including at least one attempt to reboot the character in webcomic form.

Fantagraphics Books published two collections in 2007 and 2009 — I Shall Destroy All the Civilized Planets! and You Shall Die By Your Own Evil Creation!, respectively — of Fletcher Hanks' known stories, which naturally includes both Stardust's demented adventures and those of Hanks' other characters (Fantomah, Space Smith, Big Red, et al). In 2016, a merged volume, Turn Loose Our Death Rays and Kill Them All!, came out, serving as the most definitive and comprehensive compilation of Hanks' work.