Western Animation / Room on the Broom 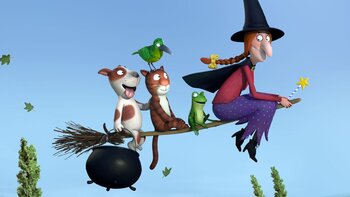 Room on the Broom is a 2012 25-minute animated short film directed by Max Lang and Jan Lachauer. It is part of a series of adaptations of Julia Donaldson's children's books by The BBC, a series that includes The Gruffalo and The Highway Rat, The Snail And The Whale and Zog.

A friendly witch and her cat go out camping, after which they zip around on their broom. In turn they meet a dog, a bird, and a frog, all of which want to join them. The good-hearted witch accepts them, but the cat is displeased and the broom is overburdened and can barely take off. They soon have a bigger problem, however: a gigantic dragon that wants to eat the witch.

The voice cast includes Simon Pegg as the narrator, Gillian Anderson as the witch, Rob Brydon as the Cat, Martin Clunes as the Dog, Sally Hawkins as the Bird, David Walliams as the Frog and Timothy Spall as the Dragon.