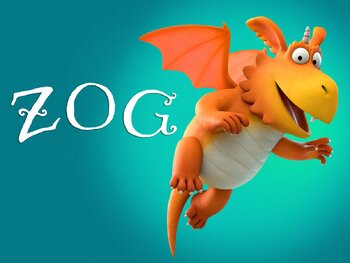 Zog is a 2018 25-minute animated Short Film directed by Max Lang and Daniel Snaddon. It is part of a series of adaptations of Julia Donaldson's children's books by The BBC, a series that includes The Gruffalo, The Highway Rat, Room on the Broom and The Snail And The Whale.

A keen yet accident prone young dragon named Zog hopes to earn a gold star at Dragon School by learning how to fly, roar, breathe fire and his biggest challenge: capture a princess, however he has the help of a kind girl who helps to patch up his cuts, burns and bruises.