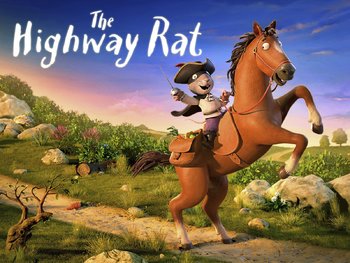 The Highway Rat is a 2017 25-minute animated Short Film directed by Jeroen Jaspaert.

It's about a greedy rat who robs other Funny Animals of their food. It was the fifth of The BBC's Christmas Animated Adaptations of Julia Donaldson and Axel Scheffler picture books, following The Gruffalo, The Gruffalo's Child, Room on the Broom and Stick Man.

The voice cast includes Rob Brydon as the Narrator/The Horse, David Tennant as the Rat, Frances de la Tour as the Rabbit, Tom Hollander as the Squirrel and Nina Sosanya as the Duck.