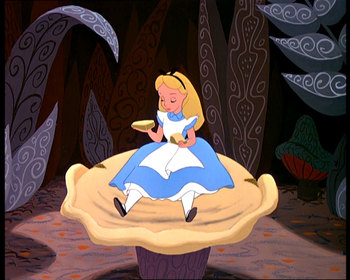 In Real Life, mushrooms, toadstools, and fungi comprise a vast array of types and genera. While a few are cultivated for food, and some for medicinal or religious (or hallucinogenic) purposes, others are so toxic they are outright lethal, so one should never assume that a mushroom found in the wild is safe to eat without consulting a reference book (or better yet, a trained expert who can distinguish between seemingly identical specimens). Further, the visible mushrooms are actually just the tip of a proverbial iceberg, with the vast majority of the organism being a large underground colony of microscopic, threadlike hyphae. Some colonies can be counted as one of the largest communal organisms on the planet. And the ability of fungi to reproduce via infectious microscopic spores allows them to grow in just about any environment (including inside living bodies), and can make it nearly impossible to get rid of a fungus infestation.

Fictional mushrooms can do all of the above, and more: Eating a mushroom can produce downright magical effects (like making you bigger or smaller, turning you invisible, etc.), and getting infected by mushroom spores can not only make you sick, but physically transform you into a monster, possibly taking over your mind in the process; villains in particular can even weaponize the spores, turning them into a tool for Mind Control or Brainwashing unsuspecting innocents.

Often used by witches, as it's a symbol of their knowledge of the nature around them. What they do with it is another matter. Toadstools appear to be most common in healing potions or poisons, though the last one does not require much magic. Toadstools and brightly colored mushrooms are often hiding places for smaller members of the Fair Folk. In some cases, the fungi, usually mushroom-like, can even become ambulatory. This is usually not a good thing, unless they just want to dance.

Hallucinogenic mushrooms are a popular way for a Junkie Prophet to unlock his powers, based on the fact that mushrooms containing psilocybin have a history of being used in real life shamanic rituals.

See also Fantastic Fruits and Vegetables. Springy Spores may overlap if found in a Mouse World.