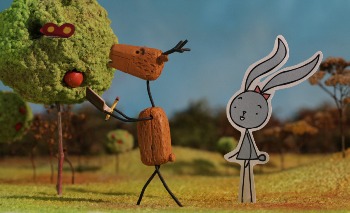 Rabbit and Deer (original title: Nyuszi és Őz) is a Hungarian animated short film, created by Péter Vácz in 2013. It tells the story of a rabbit and a deer living together in harmony. But their friendship is put to test when Deer becomes obsessed with a whole new world: the third dimension.

The film provides a lot of creative examples of Medium Blending. You can view it here