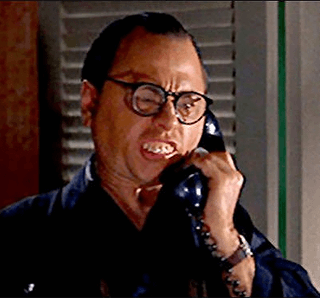 Yes, that's really Mickey Rooney under the buck teeth and Hirohito glasses.
"Some people call it ‘yellowface,’ but I say ‘the practice of blackface employed on Asians’ because it’s more evocative."
— Constance Wu, “Asian-American Actresses Discuss ‘Ghost in the Shell,’ Oscars Controversies

Yellowface is the practice in cinema, theatre and television where East Asian characters are portrayed by actors of other races while wearing make-up to give them the appearance of an East Asian person, often including epicanthic folds (the skin fold in the inner corner of the eye, a common East Asian feature). In more racist applications, the make-up is stylized with various stereotypical traits.

Sometimes it is used simply out of a reluctance to cast genuine Asian actors. A prominent example was Anna May Wong being passed over for the lead female role of O-Lan in the 1937 film version of The Good Earth in favour of white actress Luise Rainer. Miss Wong was told she "was not beautiful enough". The excuse given was that The Hays Code would have prohibited the film from showing Wong kissing her leading man as "miscegenation", because he was the white actor Paul Muni, despite their both playing Chinese characters.note MGM also missed out by not allowing Sessue Hayakawa to play Wang Lung; despite his status as the first great Hollywood sex symbol, predating even Rudolf Valentino, Douglas Fairbanks or Ronald Colman. MGM had a very white-only attitude compared to the other studios Hayakawa had worked with.

Yellowface has often been used simply to facilitate comically insulting representations of East Asians, though, unlike blackface, it has never been associated with a particular artistic tradition. It also never gained the same stigma associated with blackface, and still remains far more acceptable in Western media, as demonstrated, for example, by its use in the film adaptation of Cloud Atlas.

See also Blackface and Brownface. Interchangeable Asian Cultures is a related trope in which works play fast and loose with Asian cultures and ethnicities.

Should, under no circumstances, be confused with Yellow Face from Battle for Dream Island or the long-running cartoon with a literally yellow-skinned family.

Works in which yellowface appears:

In-universe examples (The character pretends to be Asian)