Film / The Inn of the Sixth Happiness 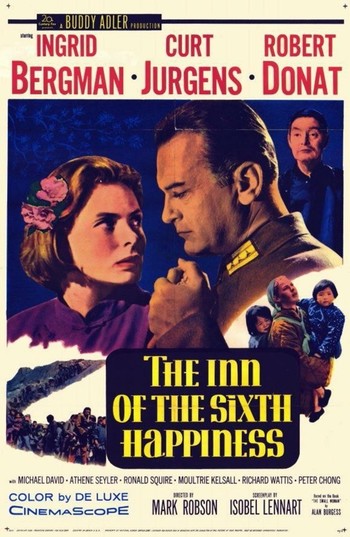 This story is based upon the life of Gladys Aylward, a woman of our time, who was, and is dedicated to the simple, joyful and rare belief that we are all responsible for each other.
— Opening title card
Advertisement:

The Inn of the Sixth Happiness is a 1958 Biopic about Gladys Aylward, a British missionary in China before and during World War II. It was adapted from Alan Burgess' biography The Small Woman, a title the film could not use due to statuesque Ingrid Bergman being cast in the lead role.

The film begins with Gladys trying to become a missionary in China, but the missionary society rejects her due to her lack of education. Eventually, she manages to get a job as an assistant to a veteran missionary working in a remote part of northern China. There, an old inn is being converted into a mission in the hopes that it will give them an opportunity to convert any travelers who stop by. Pursuing social reforms in addition to religious conversions, Gladys becomes popular with the villagers and is given the Chinese name "Jen-ai," meaning "the one who loves people." She receives support from the local Mandarin (Robert Donat) and wins the heart of mixed-race R.O.C. soldier Colonel Lin Nan (Curd Jürgens). But then comes the Japanese invasion of China...