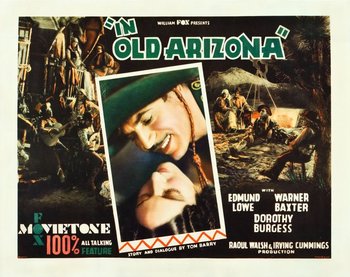 In Old Arizona is a 1928 film directed by Irvin Cummings and an uncredited Raoul Walsh, starring Warner Baxter.

The Cisco Kid (Baxter) is a thief and outlaw in the Arizona Territory in 1898. (Arizona did not become a state until 1912.) He is a rather gentlemanly thief, holding up Wells Fargo stages but refusing to steal from individuals; when the Kid finds out that the town barber lost $87 from a gold box that the Kid robbed, he returns the money.

He is also humanized by his love for a beautiful maiden, Tonia Maria (Dorothy Burgess). The Kid is devoted to Tonia Maria and plans to get out banditry and take her back to his homeland of Portugal. What he doesn't know is that Tonia Maria is actually not in love with him at all, bleeding him for money and presents while also apparently working as a prostitute while he's away. While the kid is off pulling what he imagines will be One Last Job, Tonia Maria falls for Sgt. Mickey Dunn (Edmund Lowe), who is active duty in the local cavalry battalion. Mickey has orders to be transferred back to Governor's Island in New York City, and he promises to take Tonia Maria with him and show her the high life. They hatch a plan, one that involves the $5000 bounty for the capture and killing of the Cisco Kid.

Adapted from the O. Henry short story "The Caballero's Way". In Old Arizona was one of the first all-talking films ever made. Much of it was shot outdoors when most early talkies were indoor pieces with actors standing rooted next to hidden microphones. Warner Baxter won the second Best Actor Oscar for a talking performance for his portrayal of the Cisco Kid.

Director Raoul Walsh, who had both acted and directed his previous feature Sadie Thompson, was supposed to play the Cisco Kid as well as direct. One night while he was out driving around on location, a jackrabbit leaped up and crashed through his windshield. Walsh lost an eye, and wound up being replaced by Baxter in front of the camera and Cummings behind it. Walsh wore an eyepatch for the rest of his life and never acted again, but enjoyed a long and highly successful career as a director.