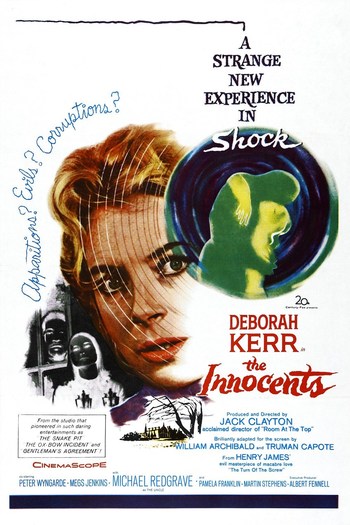 The Innocents is a 1961 British horror film adapted from Henry James' novella The Turn of the Screw, directed by Jack Clayton and starring Deborah Kerr.

Miss Giddens (Kerr), a young governess in her first position, is sent to look after two children at a country manor called Bly. At first Miss Giddens loves the house and gets along wonderfully with the two children, but she soon starts to see other people in the house. When she sees a man up close, she describes him to the housekeeper and is informed that the man in question died over a year ago. The man was Peter Quint, the master's valet. Upon learning that Quint was in a torrid relationship with the previous governess Miss Jessel (also deceased), she starts to see her ghost too. Miss Giddens becomes convinced that the two servants are trying to possess the children.

The film is notable for leaving the existence of the ghosts up to debate; like in Henry James's original book, it's never confirmed whether the ghosts are real or a product of Miss Giddens' imagination. It has also been the basis for other horror films such as The Others (2001) with Nicole Kidman, and its soundtrack was sampled for the cursed tape in The Ring. Deborah Kerr considered this to be her best performance, calling the film "criminally underrated".

The Innocents provides examples of: