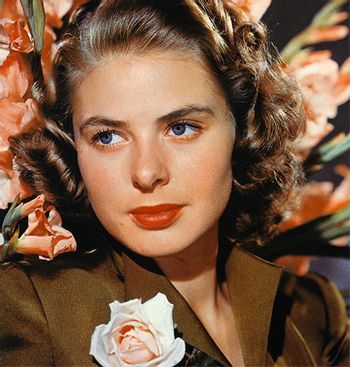 "I can do everything with ease on the stage, whereas in real life I feel too big and clumsy. So I didn't choose acting. It chose me."
Advertisement:

Ingrid Bergman (August 29th 1915 — August 29th 1982) was a Swedish actor. She won three Academy Awards, two Emmy Awards, and the Tony Award for Best Actress in the first Tony Award ceremony in 1947. She is ranked as the fourth greatest female star of American cinema of all time by the American Film Institute. She is widely remembered for her performance as Ilsa Lund in Casablanca (1942) and is known as one of Hollywood's greatest classical beauties.

In her lifetime she had the reputation for being the World's Most Beautiful Woman and created a legendary scandal when in the 1940s, she abandoned her husband and child and started an affair with director Roberto Rossellini and became pregnant on the set of Stromboli. This scandal was denounced on the floor of the US Senate with Ingrid becoming more or less Persona Non Grata in America. She had written to Rossellini after seeing his film, Paisan and wanted to make serious films and their resulting love affair and brief marriage resulted in three children and five movies. After their breakup, she returned to the stage and became more sporadic, with Autumn Sonata being her last serious role.

Mother of Isabella Rossellini. Not to be confused with and wasn't related to another famous Swede in the film industry, Ingmar Bergman (though he did direct her once, in Autumn Sonata AND later married a woman named Ingrid, thus sharing his last name. Yeah).