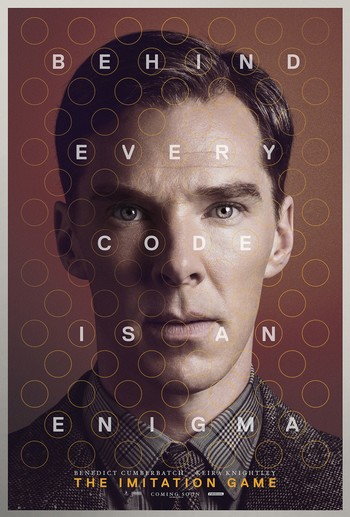 Unlock the secret. Win the war.
"Do you know, this morning... I was on a train that went through a city that wouldn't exist if it wasn't for you. I bought a ticket from a man who would likely be dead if it wasn't for you. I read up on my work... a whole field of scientific inquiry that only exists because of you. Now, if you wish you could have been normal... I can promise you I do not. The world is an infinitely better place precisely because you weren't."
— Joan Clarke
Advertisement:

The Imitation Game is a 2014 biopic film about the British computer scientist and wartime codebreaker Alan Turing, starring Benedict Cumberbatch as Turing, with Keira Knightley, Charles Dance, and Mark Strong.

The movie is primarily set during the Second World War when Turing worked at the Bletchley Park compound where the British Government had set up a top-secret code-breaking and intelligence-gathering station, under the cover of an electronics factory. Turing and his colleagues were assembled from universities around the country and tasked with breaking the German Enigma encryption that was used for most German communications.

The film also flashes back to Turing's childhood at boarding school, with Alex Lawther playing young Alan, and flashes forward to after the war during the early 1950s when Turing's background is being investigated by a police inspector who is suspicious that the mathematics professor is hiding something.

The Imitation Game provides examples of: