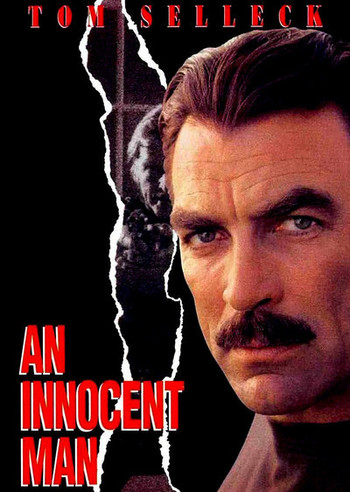 "Two Cops on the Take Just Made the Biggest Mistake of Their Lives. They Framed..."
Advertisement:

An Innocent Man is a 1989 crime thriller film directed by Peter Yates, and starring Tom Selleck.

Enter James Rainwood, an airline maintenance supervisor with a perfect wife. Things take a dark turn when James decides to take a shower one night. While scrubbing himself clean, two crooked police officers get the wrong address and bash down his door. When James comes out of the bathroom wielding his hair dryer, they think it is a gun and shoot him. Realizing their mistake, they cover themselves and frame him as a drug dealer. James refuses to take a plea and he is sentenced to six years in the slammer. In the brutal prison environment, he is given a bleak collection of options in order to survive prison. After three years, James is released on parole, and he tries to pick up his life again, but the cops from before return to threaten James and his wife. Realizing that his prison lessons must be carried over into civilian life, James prepares for a final reckoning between the cops and himself.