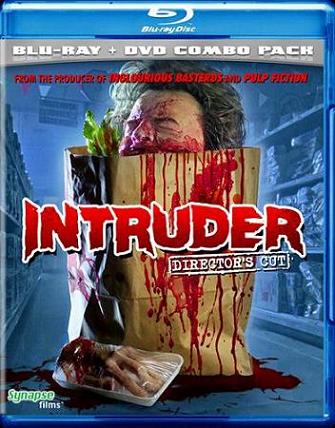 Black Friday sales can get a little messy.
"Don't you see? I'm just CRAZY about this store!"
— The Killer
Advertisement:

In a market after closing hours, a bunch of employees are working late. Then one cashier's abusive ex-boyfriend starts harassing her, and soon everyone around the store are being killed gruesomely one by one.

Even though it is a by-the-book Slasher Movie, the film gained a cult status after its release in 1989 for having a plenty of Sam Raimi regulars present (including the man himself), director Scott Spiegel's camerawork, and its gorntastic kills.

The kill scenes were cut severely by the producer for its initial release, but they are restored in the 2008 DVD-release.

Has no relation to the 2019 multiplayer video game of the same name. It is equally unrelated to the BBC series Intruders, the 2006 novel The Intruders, or the 2015 films Intruders and The Intruders.

Prices for these examples were cut: