Had to Come to Prison to Be a Crook 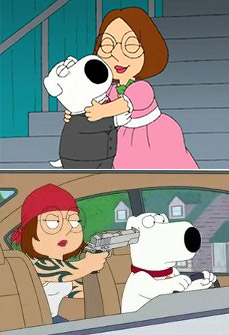 Above: Meg before prison.
Below: Meg after prison.
"On the outside, I was an honest man, straight as an arrow. I had to come to prison to be a crook."
— Andy Dufresne, The Shawshank Redemption
Advertisement:

This is the idea that throwing people in jail makes them into worse criminals than they were before. Thrown in for petty crimes? Perhaps they may learn how to get away with serious crimes. Turned to crime for monetary reasons? It's going to be even harder to get a legitimate job with jail time on their record. Falsely convicted of crimes? Perhaps once absolved, they may get away with actual crimes partly because of the impression left by the false conviction... or may be "broken" into the criminals people think they are. Not to mention what they might have to do simply to survive such a brutal environment (kind of like He Who Fights Monsters, but more like He Who Survives Monsters).

Basically, this is the concept that Prison is "A College of Crime"; being in a dehumanizing "survival of the fittest" environment, having your reputation tarnished forever, and forced to live with the worst humanity can offer, will, just for the sake of survival, force you to rely on what you have learned inside; bad, violent or criminal behaviour.

Generally accepted to be Truth in Television (to an extent, anyway) and is one of the reasons for criminal recidivism (unemployment will force convicts to rely on what they have learned in prison to survive). One of the reasons many countries lean towards punishments other than jail for first-time offenders and put a focus on rehabilitation rather than punishment for people who are in jail.

Compare Wrongful Accusation Insurance, a subtrope of Hero Insurance in which the falsely convicted commits crimes and get away with it while proving his innocence of another crime. May also be related to Go Among Mad People.

May double as a form of Nice Job Breaking It, Hero when there were good intentions behind sending someone to prison.

It was only after getting arrested that he gained the skills and connections necessary to become a successful criminal. He went in a two-bit crook with no talent or criminal skills, and came out a manipulator who could talk or bribe anyone into anything.

It was only after getting arrested that he gained the skills and connections necessary to become a successful criminal. He went in a two-bit crook with no talent or criminal skills, and came out a manipulator who could talk or bribe anyone into anything.