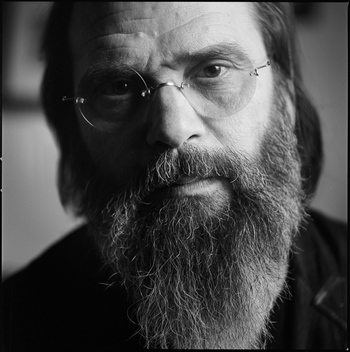 He's just singing the same old song
That he always sang before
He's the last of the hardcore troubadours
Advertisement:

Stephen Fain Earle (born January 17, 1955 in Fort Monroe, Virginia) is an OutlawCountry/Alternative Country singer/songwriter, actor, and author. After about 10 years of hanging around his favorite musicians in Texas and Tennessee (he turns up in the 1975 documentary Heartworn Highways), he finally got his breakthrough in 1986 with the album Guitar Town and became something of a country rock star.

After weaning himself off crack and heroin in the mid-90s he returned with a beard and a slightly more mature sound and has been writing and recording a lot ever since. He lives in New York City.

Earle's music tends to draw on a lot of different influences, including country, Rock & Roll, folk music, punk, and even Hip-Hop. In the 1980s, Earle's music gained considerable popularity with alternative, folk and punk fans, and he is considered to be extremely influential on the development of the Alternative Country genre. A self-described socialist, Earle is very politically active in left-wing causes, which often shows up in his lyrics.

In addition to recording and touring, he's also an acclaimed author with one story collection (Doghouse Roses) and one novel (I'll Never Get Out Of This World Alive) under his belt, and has done some acting, most notably in the David Simon-helmed TV series The Wire (in which his cover

Tropes associated with Steve Earle and his works: