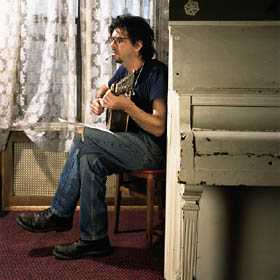 Face of the Band, Mark Linkous
A horse
A horse
My kingdom for a horse
Rattling on magnetic fields
Yes I did use up
The last box of sparklers
Before they went bad
Got wet or decayed
Advertisement:

Sparklehorse was a Lo-fi Alternative Rock / Country band from America, led by Mark Linkous (note that when we say "led", we mean "the one consistent member of the band" - all his albums featured appearances from other musicians in various roles, but none stayed on for good). A man of many talents, he was the lead singer, songwriter, and played a great variety of instruments, including guitar, piano, harmonium and drum machine.

Sparklehorse released their first album, the mouthful Vivadixiesubmarinetransmissionplot, in 1995 to largely good reception (with Sparklehorse remaining critical darlings ever since). The album, recorded with help from the band Cracker, set the band's melancholic tone, but was followed shortly afterwards by the near-death of Mark Linkous due to a drug overdose. His recovery in St Mary's hospital left him without the use of his legs for 6 months - even afterwards, they never quite regained their original strength. Despite these setbacks, in 1998 Sparklehorse released their second album, Good Morning Spider, with several songs inspired by Linkous' brush with death (though he claimed most of them had actually been written before this).

2001 saw the release of the far more collaborative album, It's a Wonderful Life, reported to be Linkous' first substance-free production (as well as his most "normal" to date, with a notable lack of unsettling songs less than a minute long). Following this was a 5-year hiatus, at the end of which Dreamt for Light Years in the Belly of a Mountain was released (the title track being his longest song, at a whopping 10:35 minutes, though it was a relaxing, melancholy track true to the band's usual style). The band's last album was Dark Night of the Soul - featuring appearances from many different guest vocalists - originally recorded (and released on the internet) in 2009, but only officially released in 2010 due to legal difficulties. Sadly, 2010 was also the year of Mark Linkous' suicide - he shot himself in the heart, without leaving a suicide note. As such, Dark Night of the Soul was dedicated to his memory.

This band and their music provide examples of:

in the silver morning hollow
trembling and getting old
smelling burnt oil of heaven
about ten years, too big to hold