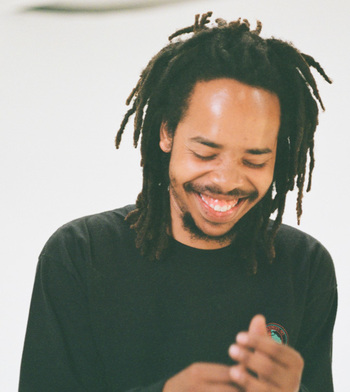 Thebe Neruda Kgositsile (born February 24, 1994), known professionally as Earl Sweatshirt (and the informal nickname "Early Man"), is an American rapper, record producer and songwriter who first came to prominence as a member of the music/skateboarding/artist collective Odd Future.

The son of famed poet and political activist Keorapetse Kgositsile, Earl started rapping in the seventh grade and began releasing music online at the ripe age of 13 under the name Sly Tendencies, with this music already containing the sharp-well-beyond-his-years lyricism he would become known for, as well as prominent influences from MF DOOM.

After corresponding through MySpace with Tyler, the Creator, as Earl was a fan of Tyler's and had caught his attention with his music, Earl joined Odd Future and quickly made a name for himself in the group. His lyrical content was arguably the most vitriolic and gruesome of the bunch when he started, constantly featuring wanton murder, rape, necrophilia and cannibalism. Despite this, his impressive and inventive uses of wordplay, double entendres and multi-syllabic rhyming garnered considerable praise.

Earl managed to squeeze out one mixtape and a handful of collaborations before mysteriously disappearing. Eventually, Complex magazine found him in a retreat school in Samoa (his mother's government job involved her working there for some time). Odd Future refused to comment on the situation, though Tyler expressed worry over fans coming after his mother for sending him there. Earl's mother also refused to allow additional songs featuring Earl to be released. His disappearance prompted the chanting of "free Earl" in concerts and in songs.

In early 2012, Earl arrived back in the United States.

He officially made his return on the songs "Home" and "Oldie", and held his return performance at a New York show in March 2012. In an interview, Earl confirmed that he was sent to Samoa but only because he was "doing some bad stuff at the time" that was entirely unrelated to his rapping. Earl's lyrical content changed drastically after his return, trading in his horrorcore elements for dark introspection and even more impressive lyrical skills.

Earl announced his Doris album in late 2012 before dropping the video for the "Chum" single. Another single, "Whoa" (with Tyler on the hook) followed in March of 2013. After much waiting, anticipation, and plenty of delays, his studio debut album Doris was released in August 2013 to critical acclaim, followed up by the near-surprise release of I Don’t Like Shit, I Don’t Go Outside in 2015. In 2018, he released Some Rap Songs to continued acclaim, with praise for its lo-fi, experimental production and deeply personal lyrics.