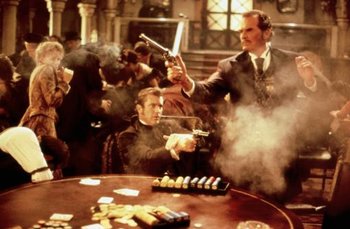 A staple of The Western. Several characters are playing Poker (or some reasonable equivalent). One is accused of cheating, and a fight breaks out. Guns may be drawn, and one or more people are likely to end up dead. In its mildest form, the result will be a Mexican Standoff, until cooler heads can prevail. If no guns are involved, may simply result in a Bar Brawl.

If someone was cheating, it's likely that they're the one who will die, unless they're an important character. False accusations are more likely to result in the death of the accuser. But there's no guarantees either way.

Usually used to show the relative lawlessness of the location where the game is being held, or to show what a low value human life has there.

Will often involve the Professional Gambler and/or the Card Sharp. Often started by The Gambling Addict on a losing streak. Will sometimes be foreshadowed by revealing the Dead Man's Hand, which is, according to legend, the hand held by Wild Bill Hickok when he was killed in just such a scenario. Despite that possibly-real example, though, this is far rarer in real life than Hollywood suggests. Don't be surprised by Tar and Feathers.