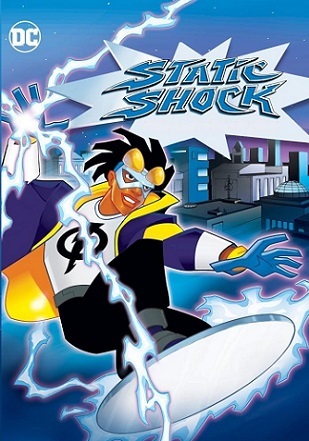 He'll put a shock to your system.
One zip, then you zapped
Good against evil, get trapped
Look in my eyes, I got the power
Villains run from the static shower
— 3rd Theme Song, performed by Li'l Romeo
Advertisement:

Static Shock (2000–2004) is an animated series in the DC Animated Universe based on the Milestone Comics series Static (albeit with several deviations). Created by Dwayne McDuffie, it is one of the rare instances where a comic book's creator was also the main creative force behind the animated adaptation.

The series follows Virgil Hawkins, the son of a local youth center manager in Dakota City. One day on the way home from school, he gets caught in the crossfire of a gang war near a chemical plant. When the police come to break it up, they fire an explosive too close to a bunch of experimental gas, spreading it throughout the city and granting Virgil and countless others a wide variety of offbeat superpowers. This event comes to be known as "the Big Bang" and the teenage metahumans as "Bang Babies," since the Big Bang was the start of their new lives.

Virgil himself finds out the next day he can control and manipulate electricity. Naturally, with some persuasion from his best friend, Richie Foley, Virgil decides to become a superhero, taking up the moniker of "Static" to defend the city from criminals, out-of-control Bang Babies, and any other super-powered threats.

Early seasons were notable for focusing not only on the usual superhero adventures, but the day-to-day struggles of inner-city life. Between the impressive super-brawls, episodes covered subjects such as gang violence, racism, bullying, gun control, and familial conflict, among others. Later seasons were more Bowdlerised, dropping the more 'adult' themes and focusing more heavily on celebrity guest stars and crossovers with other DCAU shows.note The decision to make Static Shock a DCAU show came late in production; earlier seasons imply that DC characters are fictional

Now has a recap page (with the episodes mostly in production order) that could use some work.

After absorbing too much Big Bang gas, Static's two greatest enemies, Ebon and Hotstreak, merge together into a mindless two-headed behemoth comprised of fire and shadow, reminiscent of the Balrog from "The Lord of the Rings".

After absorbing too much Big Bang gas, Static's two greatest enemies, Ebon and Hotstreak, merge together into a mindless two-headed behemoth comprised of fire and shadow, reminiscent of the Balrog from "The Lord of the Rings".