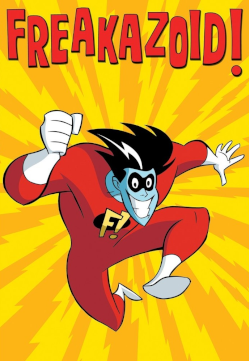 Freak out!
Jeepers: Hehehe… Do you want to see something strange and mystical?
Freakazoid: NO!! Get out of here with that watch! Lay off the poor beavers, will ya?! SHEESH! You're a creep! Go away; we were having a good time until you showed up, Jeepers! ARGH! Go have some coffee with cream, or something! Because I'll tell you something! This is a happy place!
— Freakazoid putting a creep in his place while letting the audience know exactly what kind of show this is going to be.
Advertisement:

Freakazoid! is a parody of the Superhero show, produced by the people who brought you Batman: The Animated Series and the creators of Animaniacs, Steven Spielberg and Warner Bros. Animation. It follows the adventures of Freakazoid, an entity created by the addition of all the information on the Internet note  This was back in 1995, so his head probably didn't explode thanks to the fact that hentai and Widgets hadn't become synonymous with Japan yet. He probably just went insane from all the Usenet groups. to a mild mannered computer nerd, along with weird energy based powers and a goofy sense of humor.

It parodied, lampshaded, or subverted every trope of superheroics at the time, and can be described as "an anthropomorphic fusion of 4chan, TV Tropes, and I Can Haz Cheezburger, years before any of those things existed."

In almost every adventure, Freakazoid would encounter his deadpan policeman buddy, Sgt. Mike Cosgrove, who would offer to take him to some bizarre unrelated event or activity. ("Hey, Freakazoid! Wanna go out for a mint?" "DO I!") Freak would then drop the adventure, often mid-peril, and go off to some place fun. He'd resume it shortly thereafter, as if nothing had happened.

The voice cast included Paul Rugg as the main character, Edward Asner as Cosgrove, and David Warner as Freakazoid's arch-nemesis, The Lobe.

Created by Bruce Timm and Paul Dini during the Renaissance Age of Warner Bros Animation, Freakazoid! was initially conceived as an action adventure show (with a bit of comedy). At the insistence of Steven Spielberg, it was re-tooled into a pure comedy,

at which point Timm, realizing that he wasn't suited for something so unabashedly goofy, stepped aside note although he and Dini contributed scripts that, as the producers noted, had much more coherent plots than the show's usual anarchy. and was replaced by Tom Ruegger as principal showrunner. Although the show attracted a loyal following, the demographic it delivered was older than what Kids' WB was aiming for (the show was marketed towards young children, who, not surprisingly, didn't quite understand the show's often arcane sense of humor). After a series of baffling time slot changes failed to improve ratings, the show was canceled after just two seasons. Despite this, the show later aired on Cartoon Network and has a cult following.

The series is currently available in its entirety on DVD. Tom Ruegger has expressed an interest in rebooting the show

. A crossover episode of Teen Titans Go!, aptly titled "Huggbees", sees The Lobe teaming up with the Teen Titans' foe The Brain (not that one), and the Titans subsequently enlist Freakazoid's help to stop the two. Rugg reprised his role as Freakazoid, along with David Warner, Ed Asner, and even Joe Leahy's participation!

Wakko Warner and The Brain make a surprise appearance in the second season of Freakazoid, where they have a fight over which of their shows is Steven Spielberg's favorite. When they go straight to the source for the answer...he doesn't even know who they are.

Wakko Warner and The Brain make a surprise appearance in the second season of Freakazoid, where they have a fight over which of their shows is Steven Spielberg's favorite. When they go straight to the source for the answer...he doesn't even know who they are.