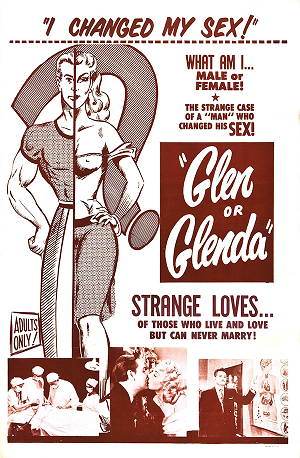 "Pull the string! PULL THE STRING!"
— The Scientist (Bela Lugosi)
"It’s about this guy, he’s crazy about this girl, but he likes to wear dresses. Should he tell her? Should he not tell her? He’s torn, Georgie. This is drama!"
— Ed Wood explaining his overhaul of producer George Weiss’ sex change exploitation script., ‘’Ed Wood’’
Advertisement:

Glen or Glenda (title changed from I Changed My Sex!) is a 1953 exploitation film written by, directed by and starring Ed Wood. It features Bela Lugosi and Wood's then-girlfriend, Dolores Fuller.

The movie consists of two parts, the first following a narrator called The Scientist, played by Bela Lugosi, making cryptic comments about humanity. At the beginning of the film proper, Inspector Warren finds the corpse of a male transvestite named Patrick/Patricia, who has committed suicide. Wanting to know more about cross-dressing, Warren seeks out Dr. Alton, who narrates for him the story of Glen/Glenda (played by Wood).

The second part is shorter, following Alan, an intersex person who fights in the Second World War wearing women's underwear. After her return, she becomes the woman she always was, through surgery. The third part bridges the two stories by returning to Glen/Glenda as he learns the story of Alan/Anne and other human gender and sex variations from Dr. Alton (whom Alan/Anne also visited), before seemingly managing to "cure" his transvestism.

David Lynch has cited this film as one of his personal favourites, and a huge source of inspiration, and many modern audiences find that, while it's undeniably pretty weird, it's not as glaringly incompetent as a lot of Wood's other work.