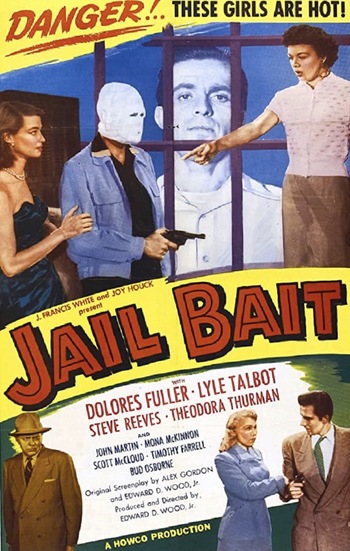 Jail Bait is a 1954 Film Noir directed by Ed Wood, his only entry in this genre. It was only his second feature film, following Glen or Glenda. The title refers not to underage love interests but to the practice of carrying unlicensed weapons, which gets one of the main characters in trouble with the police.

The film opens at nighttime in a police precinct, where Marilyn Gregor (Dolores Fuller) pays $1000 in bail for her brother Don (Clancy Malone). He is a troubled young man of wealthy background, who was arrested for carrying an unlicensed weapon. After a brief argument between the siblings, Don rushes out to meet his partner Vic Brady (Timothy Farrell). Vic is an experienced gangster who has been tutoring Don in the ways of crime.

A few hours later, Vic and Don break into the headquarters of a theater chain. Their plan is to open the safe present there and get access to over $20,000 in cash. They ambush elderly night watchman Paul McKenna and force him to co-operate. But their plan depends on nobody else being in the building. When a late-working secretary catches them in the act, all hell breaks loose. Don kills the night-watchman, and Vic wounds the girl.

The police take special interest in this case, because McKenna was a recently-retired veteran of the force. They are on the hunt for a "cop killer". Don is guilt-ridden and thinks of turning himself in, while Vic is trying to find a way to get away with murder. He soon figures that his best chance is to have a plastic surgeon create a new face and identity for him. Dr. Boris Gregor, father to Don and Marilyn, is a famous plastic surgeon. Now Vic has to find a way to make the old man work with him.

Of interest to B-movie and sword and sandal fans for being the film debut of Steve Reeves, the body builder who would later ignite the craze when he starred in the 1958 film Hercules and its sequel Hercules Unchained.