Film / Bride of the Monster 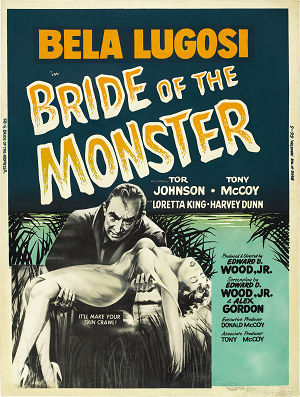 "He tampered in God's domain."
Advertisement:

Bride of the Monster (originally known as Bride of the Atom) is a 1955 horror film starring Bela Lugosi and produced, directed and co-written by Ed Wood. A sequel, entitled Night of the Ghouls, was made in 1959, but went unreleased for decades.

The story follows Dr. Eric Vornoff, who is experimenting with nuclear power in a primitive laboratory in his mansion to create an army of mutated supermen to do his bidding. Intrepid newspaper reporter Janet Lawton starts investigating, as do the local police. Meanwhile, an Eastern-bloc agent named Professor Strowksi appears and tries to persuade Dr. Vornoff to return to their homeland; instead, he gets fed to Vornoff's pet octopus-monster for getting too pushy. In the end, Vornoff is betrayed by his assistant "Lobo" (Tor Johnson) after being whipped one time too many, is turned into the monster he was trying to create, and is then blown up in an atomic explosion.

The only Ed Wood directed film to turn a profit. For the Mystery Science Theater 3000 episode see here.