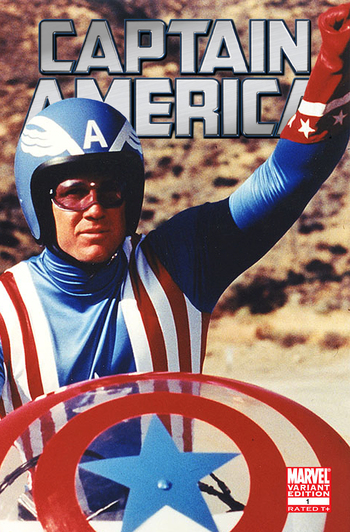 Before Matt Salinger or Chris Evans donned their patriotic spandex, Reb Brown starred in the first Captain America movie. This movie was made to serve as a pilot for a television series that was never made. The film had a sequel, Captain America II: Death Too Soon.

The first film's plot follows Steve Rogers, a former Marine. Dr. Simon Mills wants Steve to inject himself with some FLAG (Full Latent Ability Gain) serum because the serum kills anyone who uses it because of tissue rejection. He thinks Steve could use it because the serum came from his father's DNA, but Steve refuses, wanting a normal life. Meanwhile, Lou Backett is trying to assemble a Neutron Bomb and needs a microfilm so his scientist can finish it. This scientist is Jeff Haden, lifelong friend of Steve. Steve is caught in the crossfire and critically wounded by Backett's men, and Mills injected him with the FLAG serum to save his live. Now endowed with superior physical abilities, Steve decides to derail Backett's plans.

In the second film, Steve must face off against notorious international terrorist Miguel (Christopher Lee), who has kidnapped a leading research scientist. Said scientist was working on counteracting the effects of aging, and created a formula that induces Rapid Aging to that end; Miguel uses the formula to ransom a major city for millions of dollars.