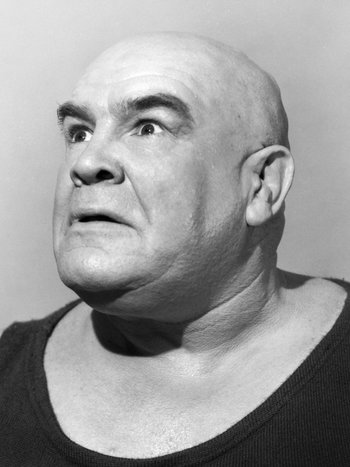 TIME FOR GO TO BED.
Advertisement:

As an actor, Johnson appeared in many B-movies, including some infamously directed by Ed Wood. In professional wrestling, Johnson was billed as Tor Johnson and Super Swedish Angel.

Johnson embraced his role as a Heel in both wrestling and acting, shaving his head to emphasize his villainous appearance. During his acting career, he befriended director Ed Wood, becoming part of his Production Posse. Johnson died of heart failure in San Fernando, California, at the age of 68. He was buried at Eternal Valley Memorial Park, in Santa Clarita, California.