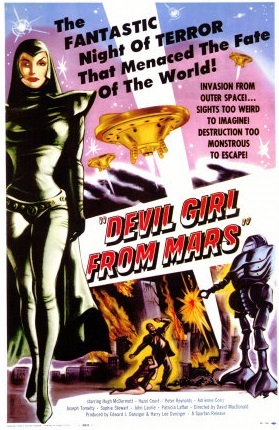 An innkeeping couple, a female bartender, a model, a scientist, a journalist, an escaped murderer and a little boy are at an inn in the moors of Scotland. Minding their own business, a UFO lands in the dead of night, from whence emerges Nyah, the titular Devil Girl from Mars, a space-queen with dominatrix boots and patent-leather cape, not to mention her highbrow imperious accent and headgear. Upon her homeworld, a war between the genders has decimated the male population, so Nyah, accompanied by her Tin-Can Robot Chani, has come in search of earth men for breeding stock. Mars Needs Men!

Was adapted from a stage play. This was the first science fiction film Gerry Anderson ever worked on (as sound editor).