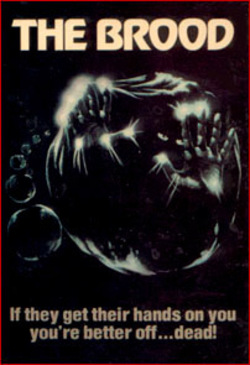 There are certain pairings that you know are going to result in something horrifying: Takashi Miike taking on romantic comedy. Stephen King making a domestic drama. Quentin Tarantino writing a crime caper. And in this case: David Cronenberg discussing alternative psychotherapy.

The Brood is a 1979 Canadian horror film written and directed by David Cronenberg (often considered to be his first really good movie), centering around a psychotherapist, Dr. Hal Raglan (Oliver Reed), who has created a technique called psychoplasmics. By encouraging his patients to "go all the way through it", he is able to induce radical physical changes. A man verbally abused by his father develops welts all over his body. Another man's self-loathing induces lymphatic cancer. And a psychotic woman named Nola Carveth (Samantha Eggar) parthenogenetically gives birth to strange mutant children who act out her negative emotions. Then the therapist starts bringing all these negative emotions to the surface, and the children start killing anyone she sees as a personal enemy...

Cronenberg has condemned the censorship of the climactic scene, "trimmed" in the United Kingdom, in which Eggar's character gives birth to one of the monsters and starts tenderly licking it clean. "I had a long and loving close-up of Samantha licking the foetus... when the censors, those animals, cut it out, the result was that a lot of people thought she was eating her baby. That's much worse than I was suggesting."

In 2005, the full uncut version was made available on UK DVD. A remake was announced in 2009 with Breck Eisner as the director, but Eisner left the project the next year and the remake was shelved.

The Brood contains examples of: