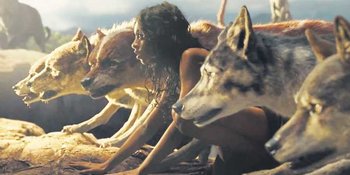 The original wild child.
Natural child, terrible child
Not your mother's or your father's child
You're our child, screamin' wild...
...do you remember when we were in Africa?
— The Doors, "Wild Child"
Advertisement:

The extreme end of No Social Skills — a feral child has lived isolated from human contact from a very young age, and has little or no experience of human care, loving or social behavior, and — crucially — human language. These individuals are not just bad at social interaction; they are so limited that they are effectively wild animals who happen to have human form. And not the friendly talking kind, either.

Characters who are raised by fictional animals are usually much better off than these kids: If a Wild Child was literally raised by animals, it will be painfully obvious that those animals were no substitute for real parents, with the child showing markedly animalistic behavior, such as a tendency to bite anyone who crosses their gaze wrong or who intrudes into their personal space, or never having learned to walk upright. Sometimes this can be played for comedy, with less harmful behaviors like inappropriate sniffing or choosing to "mark" territory.

In Real Life, "feral children" are a blessedly rare phenomenon, and almost always the result of Parental Abandonment, neglect, and/or abuse. What exactly happened to them while they were out of contact with normal human culture? Is their odd behavior caused by lack of social contact, or did they have pre-existing developmental problems already? In real life, feral kids are almost never rehabilitated. It should also be noted that the phenomenon is labeled "feral children" and not "feral humans" because there are virtually no cases of finding feral people who actually survived to adulthood — with an extremely tiny handful of disputed exceptions, they're almost always discovered when they're young.

Growing up in a jungle can lead to a character becoming the very different Nature Hero or Jungle Princess. Raised by Wolves is a subset of this. Compare with Raised by Orcs. Not to be confused with the 2008 film of the same name, which is actually about a Bratty Teenage Daughter.