Literature / The Music of Dolphins 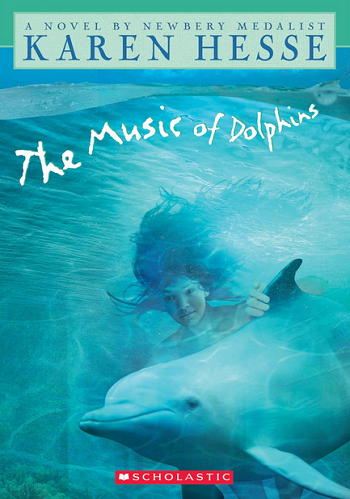 "I must get back to the sea."
Advertisement:

The Music of Dolphins is a 1996 book by author Karen Hesse. It is about a feral child named Mila, who has been raised by dolphins since she survived a plane crash at the age of 4. Now a teenager, Mila is captured by a government surveillance plane and brought to a research center for study.

Naturally, Mila is less than pleased by this turn of events, but she soon bonds with the human scientists. Although she still thinks of herself as a dolphin, she is eager to please her new friends, and quickly begins making progress. She is paired with another child named Shay, whose parents locked her up in a case reminiscent of the real-life feral child Genie

. Shay has lived in complete isolation and therefore is far less developed than Mila.

Still, the two girls take to each other, and Mila even gets Shay to come out of her shell a bit. Everything is going well at first... until Mila starts to realize that there may be certain downsides to being human, and that, no matter how much progress she makes, society at large will never accept a girl who thinks she's a dolphin.