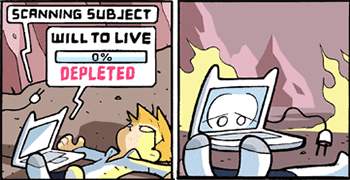 Citizen One: Indeed and it was at that very moment that Rachel Jackson began to die of grief.
Citizen Two: Grief?
Citizen One: It’s the nineteenth century. That’s the kind of shit that happened then.
— Bloody Bloody Andrew Jackson
Advertisement:

Sometimes, life sucks. People go bankrupt. Plans go awry. People we love die. Terrible things happen to people. And sometimes the poor, unfortunate people to whom terrible things happen just... stop. Death by Despair is what happens when someone loses the will to live, and as a result, just dies. There's rarely a readily apparent medical cause for it. Just a broken heart, or a broken soul for those cases not caused by the loss of a loved one.

A Sub-Trope of Despair Event Horizon, since this is the result of despair that severe.

A Sister Trope to Driven to Suicide (especially since "died of grief" is sometimes a euphemism for that trope) and Death Seeker (when simple self-preservation instincts are ignored). Also see Victorian Novel Disease, of which physical suffering and illness from a moment of great psychological trauma may eventually lead into a case of this.

Truth in Television, to an extent, in that someone who doesn't care whether he lives or dies may start neglecting his health and slip into a downward spiral leading to death. A mirrored version is also noted in elderly couples in ill health where both will seem to stave off terminal conditions and endure uncomfortable treatments for each other, but "let go" when the other has passed. Also, there is a phenomenon known as "Broken Heart Syndrome" (or, to use the technical name, "Takotsubo cardiomyopathy

") where sudden, excessive stress can weaken the cardiac muscle, which can lead to heart attacks and acute heart failure. It's rare, but not impossible. That said, No Real Life Examples, Please! We really don't need a mess of gushing and "Poor X!" gossip.

As a Death Trope, many Spoilers will be unmarked ahead. Beware.