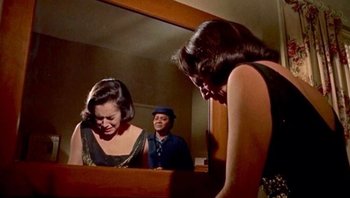 Mother, in reflection, and daughter in foreground
Sarah Jane: Was Jesus white or black?
Lora: Well... it doesn't matter. He's the way you imagine him.
(...)
Sarah Jane: He was like me... white.
Advertisement:

The story opens in New York in the late 1940s. Lora Meredith (Turner) is a widow struggling to make it as an actress as well as take care of her little daughter Susie. While on an outing to Coney Island she meets Annie Johnson (Moore) and her daughter Sarah Jane. Annie is black, but Sarah Jane's father was white, and she looks white as well. During the same outing to the beach Lora also meets Steve (John Gavin), a handsome photographer who snaps her picture.

Annie and Sarah Jane are apparently freshly homeless for some reason, so despite being herself broke, Lora invites them to stay in her own little apartment. Lora gets a break or two and finally makes it big as an actress on the stage, but she and Steve break up, as he thinks she spends too much of her time on her career. Annie settles in to life as Lora's maid and confidante, as Lora goes from success to success in show business but finds happiness elusive.

Sarah Jane for her part chafes at the racism of 1959 America and how being black, even if she doesn't look black at all, subjects her to prejudice and reduced opportunity. She also grows a major rebellious streak as the years pass and she grows from a child to a young woman. Eventually Sarah Jane decides to pass as a white person—which requires forsaking her loving and selfless mother.

Imitation of Life was the second adaptation of a novel by Fannie Hurst, the first having been made in 1934 with Claudette Colbert in the Turner part. It was Douglas Sirk's last film.