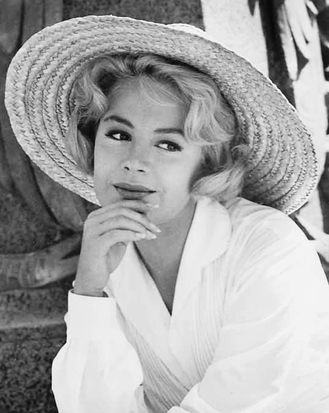 Sandra Dee (born Alexandra Zuck; April 23, 1942 – February 20, 2005) was an American actress who emerged during the tail end of The Golden Age of Hollywood in The '50s. She was marketed as a teenage star, typically playing The Ingenue.

She was a child model, appearing in TV commercials from as young as four. She retired from modeling in 1957 and moved to Hollywood, debuting in Until They Sail, marketed as the new Shirley Temple. She had numerous successes around many Hollywood film studios, constantly appearing alongside John Saxon. One of her most well-known movies was Gidget, as well as its sequels.

However, her career wouldn't survive The '60s, blamed on her marriage to Bobby Darin, which was publicised throughout the media and even more after their divorce. Dee herself blamed much of it on Contractual Purity and being shamed for acting like other Hollywood socialities. She took the odd acting appearance on television and B-Movies throughout the 1970s and '80s, but her health declined because of her heavy smoking and years of anorexia, dating back to her modelling days, and she died from kidney failure.

Dee would mostly be known nowadays by being namedropped in the song "Look at Me, I'm Sandra Dee" from the musical Grease.