With a Foot on the Bus 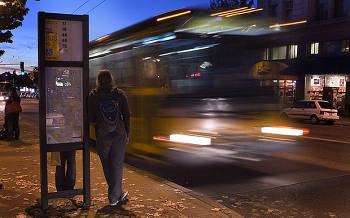 If an ongoing story has a cast of regular characters, it is common that new characters join it and others leave it. If the authors are not in the mood to actually kill him, he may be Put on a Bus to a distant location, alive and well, but not taking part in the story anymore. And even more, the bus may come back, or the character may be Commuting on a Bus. Or the bus may crash unexpectedly.

But in some cases, the character never actually takes the bus. He announces that he will do it, he says all his goodbyes, finishes his unfinished business (or decides to leave it unfinished), gets packed, shows up at the station, hears the speaker announce the imminent departure of his bus... and never leaves. Perhaps his true love came to beg him "Please Don't Leave Me". Perhaps he reconsidered. Or perhaps a meteorite destroyed the only bridge out of town, so the bus can not leave. In any case, he was about to take the bus, but never did so, and stayed in the show.

The trick may also be pushed a little further when the character does leave, but returns so quickly that their absence becomes a mere technicality. When we say "quickly", we mean quickly as "in the very same episode" or perhaps the next one; no more than that.

Usually, if he's a main character, this is as far as the bus will go, as an actual departure would be a very dramatic change, or even force the story to end on the spot. Did you think that he would really do it? For secondary characters, it is a way to point their importance to the story: if his leaving would change so much, that means he is important.

Unlike when The Bus Came Back, this all happens within an episode or story arc. The usual Real Life Writes the Plot causes to put a character on a bus (the actor left, the writer does not like the character, executive meddling, etc) do not apply.

Not to be confused with Missed the Bus, which is the literal case.

Of course, the examples may contain spoilers. But as the outcome is "in the end, the character does not leave", if you are watching reruns and have seen the work after this point, and the character is still around, you should have guessed it anyway.