Recap / Doctor Who S34 E8 "Mummy on the Orient Express" 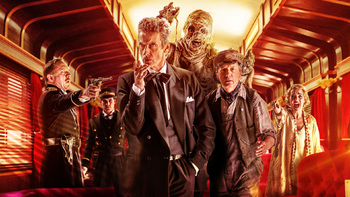 The literal rendition of, "Are you my mummy?"
Click here to see the Radio Times magazine poster for this episode: 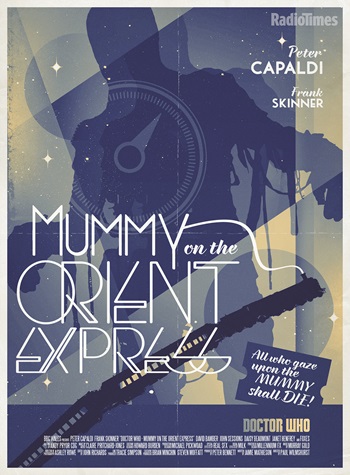 The Who's Who in the Whodunnit!
"There's a body and there's a mummy. I mean, can you not just get on a train? Did a wizard put a curse on you about mini-breaks?"
— Clara Oswald (fed up with the Doctor's magnetism to danger)
Advertisement:

The one where Foxes sings Queen.

Also, the Doctor forgot about something on his to-do list for 1.1 millennia. With his attention span, are we really surprised?

All aboard the Orient Express! A stately steam train full of smooth jazz

, art-deco fittings and sophisticated, pleasurable company. Oh, and also, it's IN SPACE!

That's pretty damn awesome, and the Doctor seems to agree. He's headed there himself for a much-needed break - a more pleasant sort of adventure, where nothing's supposed to go wrong. But things are bittersweet; Clara's come along too, breaking out the ol' flapper attire, but her impossible choice on the Moon's still shaken her, and she's made it very clear that this is her last adventure. "One last hurrah." The Doctor doesn't seem too happy, but he's content to sit with her and chat about the Magellan black hole whizzing past their window, and planets of darkness and shrubs.

Shame there's been a murder, then. An old woman's dropped dead in her train carriage, gibbering about a monster that only she could see. Meanwhile, one of the chefs just had a breakdown and started slashing at the air with a knife, trying desperately to keep something away from him. Both victims' deaths were heralded by a flickering of the lights - after that, they saw a raggedy-looking mummy, and had 66 seconds to live.

It's not quite an Egyptian goddess on the loose, but it's close enough, and the Doctor's still game for an adventure - he's taken on mummies before, right? And, besides, the steampunk AI monitoring the train seems very insistent he solve it. So begins the Doctor and Clara's last mission — to solve the mystery of the Foretold and save as many passengers as they can. Even if the Doctor seems a little too close to not caring enough about that last part...