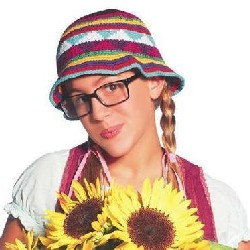 Everything is cuter with some flowers...
Patito Feo (in English, "Ugly Duckling") is a 2007-2008 teen drama from Argentina, based, as you can imagine, on the The Ugly Duckling tale.
Advertisement:

The main character is Patricia Castro, known by the diminutive of the name Patricia, "Patito" ("duckling", and yes, she's the one ugly but with a heart of gold). She lives in Bariloche, a city in the very south of Argentina, with her mother Carmen, and once fell in love with Matías, a guy from Buenos Aires, who visited the city.

Some time later, the family moves to Buenos Aires; there, they meet Patito's father Leandro, but are were unaware of this, since Carmen tried to avoid him. Patito then enrolls in a school of arts... where Matías also attends. Problem is, Matías has a girlfriend, Antonella, the leader of a group of beautiful but mean girls. And Antonella's mother Bianca is Leandro's girlfriend, and tries to prevent him from getting near Carmen.

Needless to say, the happy family is reunited in the end.

Note: As said, this must not be confused with the tale The Ugly Duckling